LETTER FROM OUR FOUNDER

In 2002 I joined the military and over the next decade plus had several friends wounded and killed in the performance of their duties. Watching the ways in which the wounded lives were altered and the diminishing of the fallen’s families had a huge impact on me.

In 2004 I began skydiving and noticed that a lot of the people at the drop zone were fellow military. In 2009 I began BASE jumping and noticed the same phenomena – I was running into military people everywhere in the sport and from all different countries. In 2009 I started flying speed wings and paragliders, and again, it seemed the number of military or ex-military pilots I ran into was numerous. 2009 was also the year I witnessed several people lose their legs during a deployment overseas. The memories were heavy. Flying helped.

In 2011, I lost one of my best friends, Mike. I felt helpless to do anything for his family and friends.

In 2012, during a BASE jumping trip to the French Alps my great friend and mentor Shane Murphy and I leapt from a cliff together, it was the last time I would ever see him. Shane loved anything that flew, and his loving mother, Nancy, started a scholarship in his name. The idea of being able to do something in honor of my friends started to roll around in my head.

2014 brought another immense loss, one of my closest friends, Brad. I vowed to myself that one day I would do something in honor of not only Brad, but Mike and Shane as well.

In 2016 my wife and I moved to Germany on military assignment. During a weekend trip to Annecy, France I saw a group of paraplegics doing tandem paragliding flights over the lake, I thought of all our military members missing their legs and arms, living with other wounds and hardships, and how much they might enjoy flying and being free of the ground. I found myself choked up while flying my paraglider. I began thinking about what it would take to start a program to give our wounded and the families of our fallen the opportunity to fly.

In 2018 I was lucky enough to be sent to NICoE (National Intrepid Center of Excellence) at Walter Reed National Military medical center. NICoE is a program for traumatic brain injury. While there, I witnessed the non-stop procession of our wounded, coming and going from the hospital. I also attended a few dinners put on by Non-profits and inquired as to whether they offered any programs that involved flying. No one seemed to know of any but they loved the idea of it. I decided that when I left active duty in a short four years I would start something as a way of giving back.

In May of 2018 I had the pleasure of being a co-host on a friends podcast called “The BASE Life PODCAST”, a podcast with a focus on BASE jumping. We spoke with Annette O’Neil and Joel Strickland, professional skydivers who were raising money for a program called “Operation Enduring Warrior” which taught wounded vets how to skydive, despite being severly injured. During the show, Annette made an observation about watching a wounded service member with several amputations who was learning to fly in a wind tunnel. She recounted how when she was first learning to fly she was uncontrollably spinning, and her coach was telling her to stop doing something with her legs or her arms that was causing the spin. She laughingly pointed out that if you don’t know what you’re doing with your arms and legs, they’re not an asset, and if your first experience in the air is without an arm or a leg, you don’t know what you’re missing and you learn to perform the maneuvers a different way. In skydiving, you’re still ‘physically equal in the air’. The moment the sentence left her mouth I was floored.

In June of 2018 while on leave to a BASE jumping trip in the French Alps, a close friend of mine named Alex Sonnenberg and I labored towards an an exit point with the intention of making an evening jump and then going for pizza and beers. During the hike, I bounced ideas for a veteran-aimed paragliding program off of Alex. Alex had been an EOD operator at the highest levels while in the military and had eventually left the military to attend Wharton business school and pursue a career in the energy industry. He was also a board member for a Non-profit called One More Wave foundation, a veterans-focused non profit which teaches wounded vets how to surf. As we hiked, he told me how rewarding it was to help and encouraged me not to wait until my time in the military was up but instead to go forward with the idea and start approaching key players about taking part. Tragically, we lost Alex on that jump, a mere forty five minutes later. His words, however, stuck with me.

In September of 2018 my wife and I were preparing to move back to the United states. We had already moved out of our apartment and were staying in a hotel room. On a restless night I decided to call a friend of mine, Matt Gerdes. Matt co-owns and runs an incredibly cutting edge wingsuit company called Squirrel and is the only one of my friends to launch something so unique and successful. He also works closely with Ozone paragliders, the world’s largest manufacturer of paragliding equipment. I asked Matt if he would sit on the board of directors and offer advice. He said yes so quickly during that call that it bolstered my confidence immensely- this whole thing might actually work! I got off that call and cold called someone I knew only by a reputation that preceded him, Nick Greece. If you are exposed to paragliding for even a short time you will learn the the name Nick Greece. Nick has done it all. He’s traveled the world flying, from California to Iran, Africa, you name it. He’s held records, he’s won massive long distance races. He’s also instructed people on how to become paraglider pilots. Nick said yes, that he would take part and from there, I knew we had something. Over the next several weeks I contacted good friends of mine with the skill sets we would need to fill in all the gaps.

One of my closest friends in the world; Blake Robinson, a man well versed in running skydiving drop zones, who understands marketing and in general just gets things done. Dr. Robert Koffman, a retired Navy Captain who left his work as a flight surgeon to become a psychiatrist and continue helping those in need. Linda Rangel, a long time friend all the way back to the sixth grade but also a Stanford educated lawyer with wisdom beyond her years and experience creating her own non-profit, Voxerity, which supports a mental health initiative. Josh Higgins, we learned to skydive together and have been like family for years. He’s also been thriving in the San Diego cut throat real-estate market for the past twenty years due to his hard work, determination and frankly…his special brand of Josh charisma. Ben Betz, a former colleague and one of the all around smartest people I’ve ever met, he has experience in many things, from shaping surfboards to starting businesses from the ground up, he has always been someone you could place supreme confidence in.

Just before leaving Europe, I spent a weekend with friends Brian, Randy and Thi in Walenstadt, Switzerland. Sitting around a dinner table in a traditional style restaurant, we went back and forth over what I might name this project. We came up with a lot of names, some good, some bad and some downright terrible as the waitress continued to bring Swiss beer. We settled on “The Uplift Union” because the purpose was in the title. We as the American people have a connection to our men and women in uniform, a union. Those in the service undeniably have a union to one another. My father, a career paramedic, once told me a parable about a medic who found himself depressed after witnessing too much carnage. He was in a hole. People walked up to the edge of the hole and offered to try and pull him out or offered advice on how he might climb out on his own, until another medic came along and jumped into the hole with him. “I know how to get out of this hole, I’ve been in here before.” He knew how to lift his buddy up.

The story of how The Uplift Union came to be might seem like a depressing one, but it has been the worst and best moments of my life which have most impacted me. I could sit and write you a stack of paper on all the absolutely incredible experiences I’ve had with so many amazing people throughout the years, thanks to flying. Truly, the best moments of my life have either been spent in the air or shortly after on the ground with friends. The bonds you make are quick, deep and lasting. I would not take it back for the world. I have seen so many places and been exposed to so many things, all thanks to this world of flight.

Our daydream at The Uplift Union is to one day drop our paraglider packs at a take off site, exhausted from the hike and look over to see a group of our graduates and to then fly down to share a beer with them and hear their stories of how flying and community has impacted their lives. 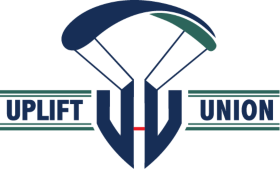 The Uplift Union Emblem: The U’s are back to back covering down for one another, watching each others vulnerable area. They are connected by a red dash, representing the bond of bloodshed. The silhouette of a paraglider hangs over head connecting both of the U’s and lifting them both up. It represents the common ground and shared love of flight and is colored Green and blue representing renewal (green) and unity (blue). 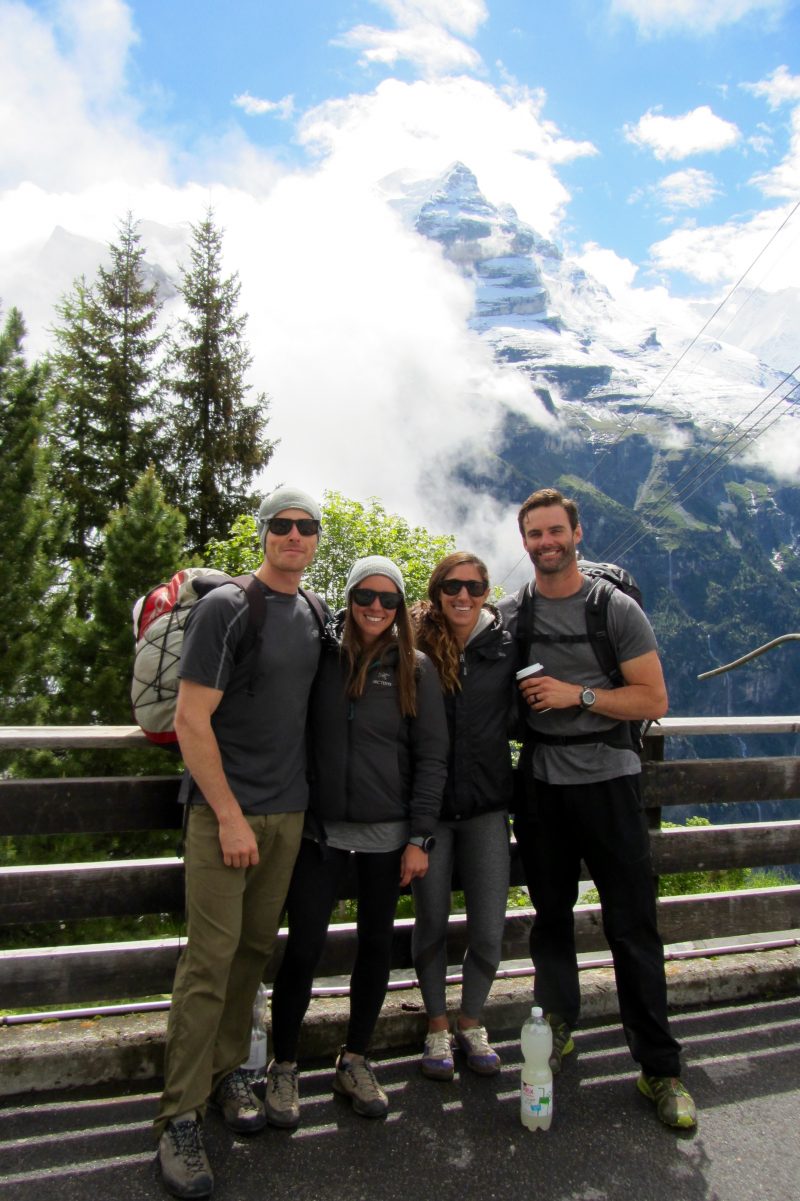 Give back today. It doesn’t take much. Even the smallest gesture of support can mean everything to someone who sacrificed so much.